"Literature is not an ornament, a pleasant pastime, a pretty flower. Literature is a weapon to struggle against injustice." 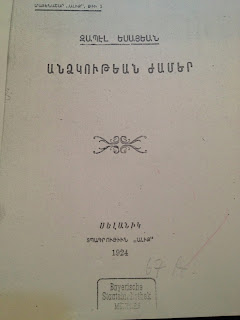 As feminist literary criticism has developed over the past two decades, it has made readers aware of the extent to which the forms of woman’s desire are not natural and unchanging givens, but rather are constructed differently in every society. This shaping of desire is achieved by the combined force of social relations (for example the institutions of courtship and marriage) and verbal representations (for example, fictions which depict and evaluate various manifestations of desire).
Much of Armenian fiction and criticism, like Armenian society itself, remains slow to acknowledge and explore feminine desire. Indeed, even male desire, a less taboo topic, is actually rarely rendered directly; its occasional representations remain highly conventionalization have affected two dominant misconception which persist in all but a fraction of the considerable output of critical essays and commentary which Soviet Armenia and the Diaspora produce. The first is the conclusion that the massive problems created by the trauma of genocide and the urgencies of maintaining collective identity rightly overshadow the problems of sexuality and the construction of gendered subjectivity, both in the real world and in narrative. This view follows in part from an Armenian conception of narrative art, which demands that it contribute to the fulfillment of the social agenda. The second misconception is expressed by the degree to which the problematic status of desire, when recognized, is framed by the concept of intermarriage, by the act that brings the odar, the stranger, the seductive other into the bosom of the Armenian family. In other words, when it is acknowledged to exist, desire is conceptualized as one of those problems threatening the nation; it is displaced and misrecognized as an aspect of the problem of assimilation.

For more info or requests, write to: